The ancient Catholic village of Kiên Lao in Nam Định Province is well known for its bronze casting.

Mai Văn Tân, chairman of Xuân Tiến Village (as it is now known), says: “Bell casting has been around for more than 200 years, and there is still room to develop.” 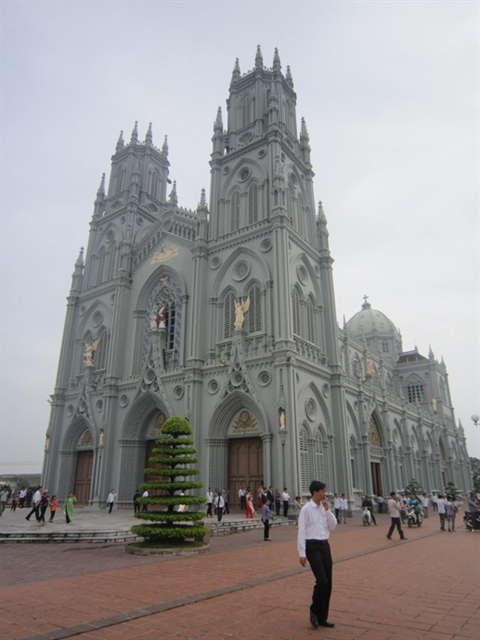 Kiên Lao Church, which was built in 1533, is one of the most beautiful catholic churches in Nam Định Province. Photo nhathoconggiao.com

Bell casting has existed in the village for more than 200 years. Photo anninhthudo.vn

To make a bronze bell, a worker first has to make a mould from clay mixed with rice husks. The mould is then fired to harden it, and while it cools workers design patterns inside before firing it again, he says.

“Kiên Lao casts are always high quality thanks to the dedicated workers. The process of polishing the statues is very important to ensure their longevity,” Khiêm says.

To cast a statue, a worker needs skilled hands and a rich imagination, and more importantly they need to know the correct size, physical form, costumes and characteristics of each statue.

Hoàng says he was impressed with Khiêm’s Buddha statues because of their expressions of mercy, leniency and sublimity.

Khiêm says in most villages, the traditional job is handed down to male heirs, but in Kiên Lao, both men and women pursue the job.

“We produce different kinds of bells; some for churches and others for pagodas. Each bell has its own sound. The church bells have a higher pitch while pagoda bell emits a lower tone,” Hậu says.

A perfect bell should ensure the right tone, shape and designs, he says.